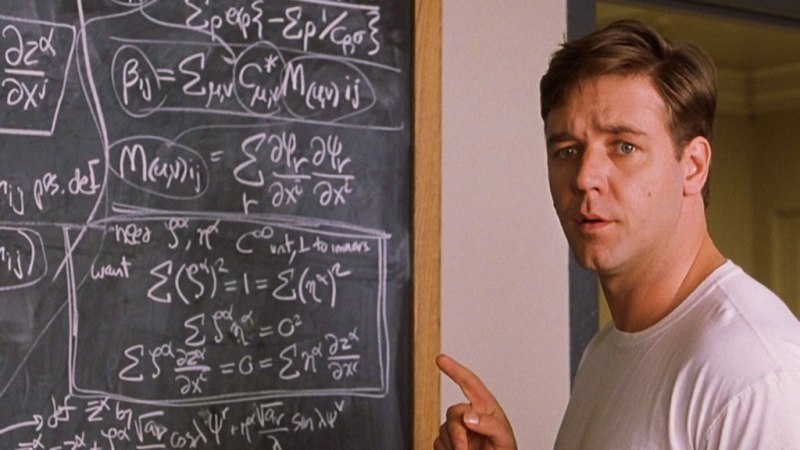 I’ve recently taken an exam with a curious and fascinating name: ‘Games and Strategies’.

In a few words, the subject from which it stems, game theory, is a completely new area of science exploring the interactions among the agents in the society, their behaviour, and their best response to the problems they are faced with.

This subject is a mix of mathematics, economics and psychology and it is widely used in global trade negotiations, national labour negotiations, political elections and even in evolutionary biology.

Game theory was first developed by the mathematician J. von Neumann and the economist O. Morgenstern, but in the middle of the 20th century it received one of its greatest contribution by an original and singular mathematician: John Nash.

The night following my exam, I thus decided to watch the Oscar movie dedicated to this genius: ‘A Beautiful Mind’ (2001), starring Russell Crowe and directed by Ron Howard.

People who know me well know I am not so keen on movies and I’d rather read a thousand books instead, but I felt I had to watch it. After all, John Nash is like a close relative for us who studied game theory, until a few days ago you would hear us talking to each other and asking ‘Have you found the Nash Equilibrium?’ or ‘What’s your Nash? Is it strategy (BL)?’.

So now, I want to tell you a little about this friend of mine, who inspired me so much with his life and career, and to whom I feel I owe something to.

John Nash was born in West Virginia in 1928, and he studied mathematics at the Carnegie Institute of Technology, completed a doctorate at Princeton University and carried out research and teaching at the Massachusetts Institute of Technology. By the age of 21, he had published an influential paper called ‘Non-Cooperative Games’ in which he described the mathematics that there is under bargaining processes and the governing dynamics of players in a multi-player game.

But what is precisely what we all call a Nash equilibrium? The ground-breaking though simple and humble discovery Nash made?

I found the logics and reasoning behind a Nash outcome romantic and hopeful. Before him, Dr Neumman and Dr Morgenstren had addressed only ‘zero-sum’ game situations, where a player’s gain is someone else’s loss. Nevertheless, John Nash went beyond it, and provided a chance for mutual gains for players in a multi-player context. How? He simply had the intuition that, in a competitive game, in order to be all better-off, the best result will come from everyone in the group choosing to do what’s best for himself and the group! Before Nash’s intuition, the prevalent belief back then was that ‘In competition, individual ambition serves the common good’ as his colleagues posit in the movie, paraphrasing Adam Smith’s ‘invisible hand’ theory. I find Nash’s conclusion a message of love and altruism, a place where the individual and the ‘competitors’ interests can somehow exist together peacefully, and even though this outcome may not provide a social optimum, it was a first move towards it and it paved the way to the future studies in game theory which led to meaningful and far-reaching results and applications in current economics and social sciences.

What I liked so much about the movie ‘A Beautiful Mind’ and what made me get fond of this mathematician, is his character.

John Nash had an introverted character, he was ‘socially awkward’, and was best-known for his ‘odd habits’ and ‘intellectual arrogance’, his thirst for recognition and his competitiveness, which may well have proved to be the drivers of his genius and success. As a friend of his told in an interview with the NY Times: “You don’t find many mathematicians approaching things this way now, barehandedly attacking a problem”. The originality of his thinking and his searching for the truth made him a genius of his time.

He had a lonely character, felt he didn’t like people and people didn’t like him, that’s why he couldn’t see accomplishment in what he achieved, but what he looked for instead was ‘recognition’ as the only way he thought he could really become someone who matters. However, he didn’t’ need recognition from the public because he was ‘recognized’ from the woman who loved him above everything and everyone and whose love relationship with him touched me deeply and profoundly.

In 1955, he met at the Massachusetts Institute of Technology Alicia Larde, a physics major and one of the only 16 women in the class back then. The two married in 1957 and from then on, an undissolvable bond will tie them forever. Alicia taught him that not all life could be explained by mathematical models, that there aren’t empirical proofs for all events of life, and that love was one of them, one of those things you just believe in without the need of scientific data to be sure it exists. She taught him that sometimes the answers are to be found in the heart, and not in the mind.

As to what happens to other ‘beautiful minds’, John Nash was special, he belonged to another world, an ideal one, maybe the one he was strivingly looking for through his studies, and in 1959 he started suffering from delusions and schizophrenia. These mental disorders led him to be hospitalized and hampered his research activity for a while. In all this period and these inner struggles, his wife would never abandon him. What I found amazing of this couple, is their resilience and strength: even if Ms. Nash divorced John Nash in 1963, she continued to stand by him and in 1970 she took him to live with her. Finally, they got married again in 2001.

In 1994, John Nash received the recognition he had so much aspired to with the Nobel Memorial Prize in Economics, a life-long achievement after a life of commitment and devotion but even of struggles and hurdles, which he successfully overcame hand in hand with the love of his life, Alicia.

It is to her that he addresses the speech at the award ceremony in Stockholm, and even though this speech is just a fiction of the movie, I want to believe these were the real words that translated his inner, mysterious and sometimes unconfessed feelings: ‘I’ve always believed in numbers. In the equations and logics that lead to reason.  But after a lifetime of such pursuits, I ask, what truly is logic? Who decides reason? My quest has taken me through the physical, the metaphysical, the delusional, and back. And I have made the most important discovery of my career. The most important discovery of my life. It is only in the mysterious equations of love, that any logical reasons can be found. I’m only here tonight because of you. You are the reason I am. You are all my reasons. Thank you.’

I do know there was something special in this couple, the union of love and science, and it couldn’t be otherwise: touchingly, Mr and Ms Nash died together in a car accident in 2015, just when they were heading home from the airport after a trip to Norway, where Mr Nash had received the Abel Prize from the Norwegian Academy of Science and Letters, one of the most important prizes in mathematics and one of the greatest accomplishments of one’s scientific career.